We are proud to announce our new TV Series & Competition: War Race Showdown

What is War Race Showdown?

It’s a unique 1 on 1 competition that is held in 3 rounds. Here’s how the competition enfolds:

This is a quiz in which both soldiers will have to answer 7 cultural questions within 7 seconds.

Each time the soldier gives a wrong answer they get a 1-kilo score. The soldier with the lowest kilo count wins the round. The total of kilo’s cumulate per soldier will match the total kilo’s they will have to carry in their KAMO while performing round 2 and 3

In this round, soldier 1 chooses the exercises to challenge Soldier 2 in a showdown. Both soldiers have to wear KAMO with the added kilo’s based in round 1

The winner of this showdown wins this round.

In this round, Soldier 2 chooses the exercises to challenge soldier 1 in a showdown. Both soldiers have to wear KAMO with the added kilo’s based in round 1

The winner of this showdown wins this round.

In the event of a tie, an additional challenge will be conducted to determine the winner. This is the WAR RACE DEAD HANG. Both soldiers must hold on to a bar as long as possible with their KAMO. The soldier who lasts the longest wins the showdown.

The overall winner of the showdown is the soldier who won the most rounds.

After this first showdown, the winner will take on the next showdown against “a challenger”. Anyone in the Facebook/Instagram community can challenge the winner. ONE RULE: TO HAVE PARTICIPATED IN A WAR RACE EVENT OR TO OWN A FUTURE WAR RACE TICKET.

A draw will be made to design the chosen challenger to come and compete against the titleholder.

Each episode will be published on our website and social media and the content of it will be one round.

WHAT CAN YOU WIN?:

Both contestants will win a SHOWDOWN MEDAL 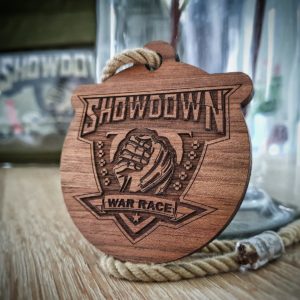 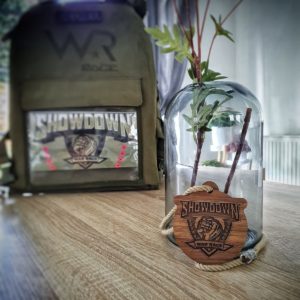 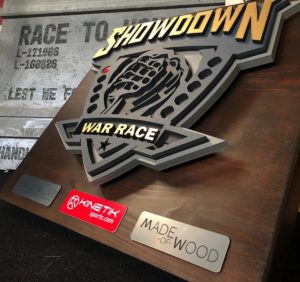 *** The winner of the showdown can hold on to the trophy as long as he/she remains undefeated. Once defeated, the unique trophy will be given to the new winner. Only if the winner manages to win 10 showdowns in a row, will he/she be able to keep the Trophy forever!

In partnership with NOCCO & Mowlab